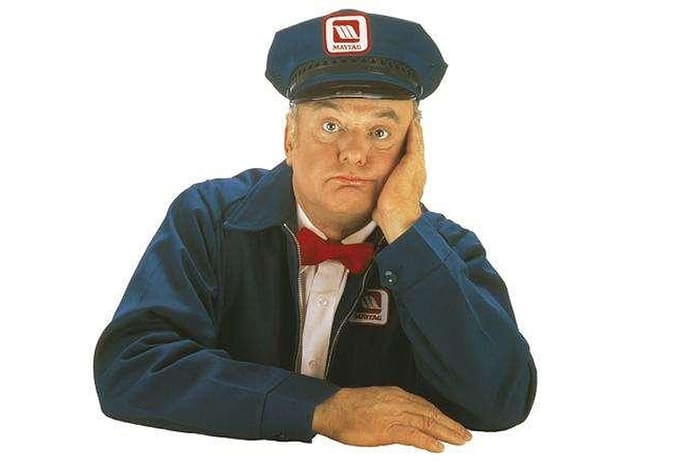 They called him “Ol’ Lonely.”
First it was Jesse White, starting in 1967. He eventually passed the mantle to Gordon Jump, he of WKRP in Cincinnati fame, in 1989.
The two actors played one of commercial marketing’s most enduring characters: the Maytag Repairman — the poor, ever-napping, solitaire-playing, phone-watching soul, one doomed an endless extended lunch break.
The TV commercials were a clever piece of marketing for a company that used to list its corporate headquarters’ address in Newton, Iowa, as “One Dependability Square.”
Their reputation for reliability began in 1915 with production of the very first aluminum washer tub, was solidified with the invention of the agitator and ‘Gyrafoam’ washer, and continued through the second World War when they switched their production over to parts for legendary warplanes like the B-17 Flying Fortress and P-51 Mustang.
Now, in the present day, Maytag is still consistently rated as one of the most durable manufacturers in their market segment.
But top-selling? That would be LG, the South Korean electronics company that makes everything from smart watches to tablets to TVs, and, yes, washer-dryers.
And all of LG’s products seem to have one thing in common: a finite lifespan, and not one blessed with one of longevity.
Why make a device or machine that lasts for years when it can be replaced with a new one?
Even if a lifespan hasn’t been intrinsically baked into a product’s DNA with designed obsolescence, the artificial idea of one can be introduced to the psyche of the consumer market.
It’s not so different from the the roofing industry, where every stakeholder currently benefits from the premature replacement of a roofing asset, each sector tooled to carve out a profit from the installation of a new, retrofitted roof.
At RMS, we believe the industry at large has worked to calibrate the buyer’s expectation of an appropriate service life for low-slope roofing systems. Even large-scale end users, such as a multinational, hypermarket retailer like Wal-Mart, have reports from their own building design professionals stating that by incorporating single-ply roofing systems into their building construction, they’re acknowledging the accompanying lifespan of approximately 17 years.
With the prevailing belief that a typical big box store structure is built to last approximately 50 years, that means a roof replacement of at least twice during the expected building envelope’s lifespan. And that would mean each a roof is replaced, 48,000 cubic feet of non-biodegradable material is dumped into a landfill, a massive environmental impact considering the number of stores associated with each major big box brand, to say nothing of the huge costs involved with the work.
But what if the lifespan of those roofs was could be avoided by maintenance and other proactive measures? RMS believes that it is not only possible, but should be of paramount importance to the industry.
One of our main goals is to create and utilize an environmentally friendly, single-coat hydrophobic and reflective roof coating that can be easily applied to any roof surface with minimal preparation, the gains can be seen across vectors.
It would mean a reduction in the thermal load on the primary water barrier, reducing thermal movement and wear; the coating would be 100 percent waterproof, with advanced water-shedding capabilities to protect the primary barrier from the degradation associated with standing water; and it would be cost effective, advancing the preservation of the existing roofing inventory throughout Canada.
While there would not only be extensive savings in avoiding the massive capital expenditures associated with roof replacements, it would also mitigate the environmental impact, with a potential reduction in more than 15 billion cubic feet of non-biodegradable material would never enter landfill sites.
Other measures, like the production of a maintenance drone — a first in the industry — would ensure building owners could afford maintenance while reducing the risks of injury to workers associated with the roofing industry.
The predictive repair drone, currently in initial design phase with an industry-leading industrial design firm, would marry state-of-the-art electrical capacitance metering and a pinhole detection system in a fully autonomous model, helping to drastically reduce occurrence of future leaks on single-ply roofs in the most cost-effective manner possible.
Snow depth management could also be readdressed with the development of an early detection system that has “laser” accuracy to avoid dangerous accumulations of snow and ice on clients’ roofs, without the need to set foot on them.
Our goal at RMS is to solidify our philosophy as an economically viable and sustainable business model, with the company benefiting by generating credibility as a viable alternative to the traditional consultant-roofer relationships, establishing a more proactive approach to roof management. This would in turn create more growth channels and revenue to the company.
‘Ol’ Lonely,’ the Maytag repairman, is a romantic ideal dreamt up by marketers. And while partnering with RMS would mean seeing less of our technicians, ultimately, it means more on the bottom line on the ledgers of both dollars and conscience.

Ernie has served the commercial real estate industry for over 25 years. As a partner at two engineering firms in Ottawa, prior to starting Roof Maintenance Solutions (RMS) in 2012, he repeatedly observed a gap in the roofing trade that left building owners and property managers exposed to high roof repair and replacement expenses due to a lack of regular maintenance. In response, RMS was created to proactively find ways to prolong the life of roofing assets.